When K-pop group Monsta X dropped the music video for their new single, “Alligator,” on Monday, I have to admit that I automatically loved it due to being a University of Florida alumna. (Go Gators!) School spirit aside, the hair and makeup in the fiery music video, which dropped Monday, were mesmerizing, too. They were a seamless continuation of the looks from “Shoot Out,” the K-pop group’s last single. I.M’s faux brow piercing made a repeat appearance. Also, MX’s makeup artists proved that they truly know what works best on the boys: metallic shadows in sharp shapes and rich mattes expertly blended out.

Of course, all of the members have brand-new hair colors, too. They didn’t officially reveal their new looks until teasers for the music video were released, though. They have different dye jobs in the promo images for their new album, Take 2. We Are Here. Several members dyed their hair black, including Minhyuk, Hyungwon, Joohoney. I.M, on the other hand, bleached his hair the blondest it’s ever been. 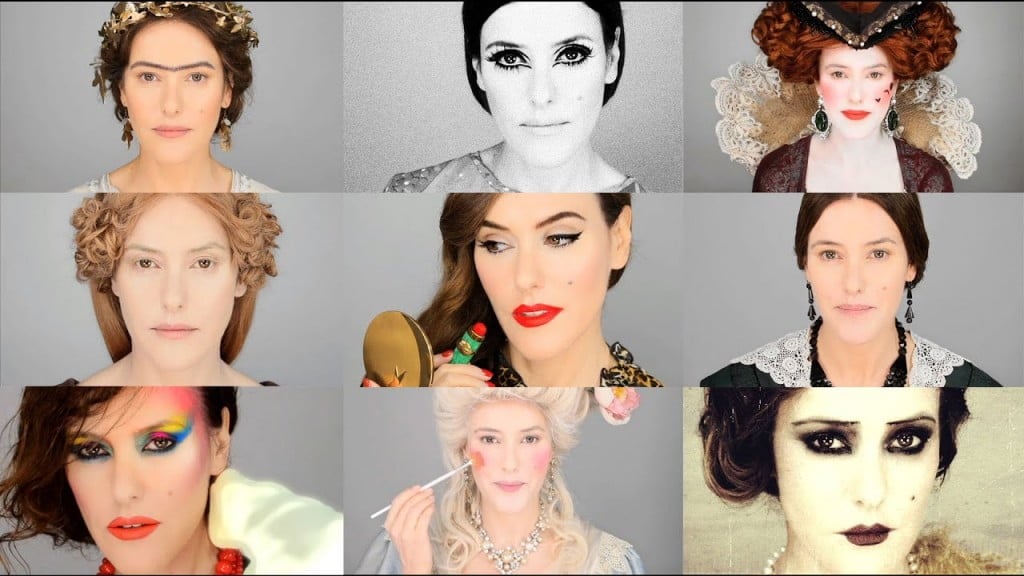 The makeup, however, was the beauty highlight of “Alligator.” Let’s take a closer look at seven of the best, fiercest looks. I’ll even give you some tips for achieving them yourself.

Jooheon’s new stage name — Joohoney — may be sweet, but his intense eye makeup is absolutely not. A charcoal shadow was buffed around the outer corners of his eyes and topped with even darker black, winged liner. Paired with his fresh, jet-black dye job, the rapper looks like the villain in a superhero rom-com that you really don’t want to like but can’t help but root for.

To recreate Joohoney’s sooty, smoky moment, start by packing black eye shadow, like the Best of Beauty-winning L’Oréal Paris Colour Riche Monos Eyeshadow in Noir C’est Noir, with a dense brush around the outer corners of your eyes. Then, blend out the edges with a clean, fluffy brush in small, back-and-forth motions. Once the shadow is suitably diffused, draw on flicks with your favorite black liquid liner.

Black nail polish has become a staple in I.M’s beauty routine over the past couple of months, and the goth look finally made its official video debut in “Alligator.” I thoroughly appreciate that the aesthetic of only some of his nails being painted instead of all of them. If you need new black polish, try Jinsoon’s Absolute Black.

The first time I watched “Alligator,” I missed this major beauty moment. At the 2:08 mark, you can catch a clear shot of Wonho with streaks of black paint down the center of one of his eyes. One of the lines even cuts through his eyebrows. Asymmetrical eye makeup that goes beyond the boundaries of lids is extremely me, so I can’t believe I had to have watched the music video at least three times before noticing Wonho’s graphic liner. My fingers are crossed that he’ll have the same look for a televised performance.

Newly auburn Kihyun has minimal makeup for most of “Alligator.” In a couple of scenes, his lips are stained with a brick-red tint, though. In my educated guess, it might be his TonyMoly Lipton Get It Tint S in Oh My Rose or even the Lancôme Matte Shaker Liquid Lipstick in Good Red’olution. Either way, I need both because it’s a great everyday shade.

The metallic accents on Hyungwon’s eyes are surprisingly ethereal compared to the other members’ looks. Golden champagne pigment, in either shadow or eye pencil form, was etched along his waterlines. The shimmering shade help give his eyes a brightening, twinkling effect that contrasted his dark hair. You can easily try this look at home by running a liner like the Lottie London AM To PM Kohl Eyeliner Pencil in Sunburst along your waterlines.

Monsta X’s makeup artists took a similar approach to Shownu’s most dramatic eye makeup for “Alligator” as they did for Joohoney. Instead of black shadow, though, they emphasized the outer corners of his eyes with a deep, bronze hue, like the Makeup For Ever Artist Color Eye Shadow in Cauldron. Then, they layered a cat-eye for up Shownu’s ferocity.

After bringing pink shadow look after pink shadow looks to “Shoot Out,” Minhyuk’s makeup was unexpectedly devoid of color for “Alligator.” The only bit of glitz he wore came in the form of a high-shine gloss swiped on his lips while the other members seemed to have matte lips for the video.